Our Imagex™-TGi and Imagex™-nanoCCD cooled CCD Cameras are complete ‘Turnkey’ Time-Gated Imaging systems with integrated programmable Lamp Pulse, Gate Delay and Gate Width generators all accessible from a simple but comprehensive Windows application or using the user library with a 3rd Party Development system such as LabView™ or Visual Studio™.

What is Time-Gated Imaging?

Time-Gated Imaging is a type of stroboscopic imaging process.  The Imagex™ camera generates Lamp Trigger Pulses at a user-defined frequency. For a period after the lamp pulse (know as the ‘Gate Delay’) the camera is insensitive. The camera then becomes sensitive for a user-defined time period (known as the ‘Gate Width’). This process repeats until enough ‘Gated’ signal has accumulated to readout as an image. Imagex™ cameras have cooled CCDs allowing them to integrate for 10s of seconds for each frame.

This process allows the user to suppress or ‘Gate Out’ unwanted short lifetime signals or alternatively to capture different components of a Long-Lifetime Fluorescence Decay to obtain Lifetime-related contrast.

Imagex™ camera systems combine all the components of a time-gated imaging system within a single unit that can be programmed via the USB2.0 interface from a Windows PC using the supplied software.

Imagex™ Cameras are Integrating Time-Gated Detectors. This means that they store the ‘Gated’ signal from many excitation events on the CCD before reading out the image. 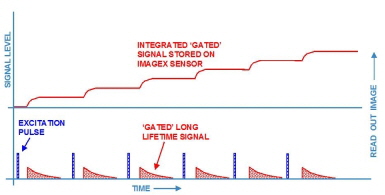 The images above show an Eu Cryptate-labelled microarray deposited onto a nylon hybridisation membrane. The sample was detected with the Imagex-TGi system in ‘Ungated’ (20msec exposure) and ‘Gated’ (8000msec exposure) modes. The gating frequency for the ‘Gated’ Images was 300Hz with a Gate Delay of 300usec and a Gate Width of 2000usec. The excitation source was a pulsed Xenon flashlamp. The experiment shows the ability of the Imagex-TGi system to reject huge amounts of short-lifetime background fluorescence when used to detect a Long-Lifetime probe.

Because the frequency response of Imagex camera systems is intrinsically wideband it is very well suited to multiplexing on the basis of fluorescence lifetime. This means that even where fluorescent probes have overlapping emission spectra they can easily be distinguished from each other if they have very different lifetimes.

The Imagex-TGi Time-Gated CCD Imaging system is a complete integrated time-gated CCD camera system. It does not use a gated intensifier to implement time-resolution because the time-gating signals are applied directly to the CCD itself. This means that the resolution, noise performance and spectral sensitivity that you experience are those of a cooled CCD camera.

The Imagex-TGi system integrates all the frequency generation, light source triggering and delay functions into a single compact unit with a USB2.0 interface allowing complete control over all of the time-gating parameters and image readout. 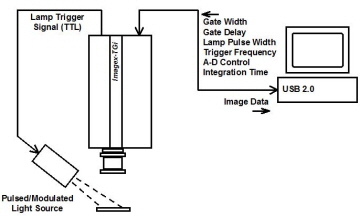 The Imagex TGi is suitable for time-gated imaging of fluorophores of lifetimes of >c.100nanoseconds. For experiments with shorter lifetime materials we recommend the Imagex-nanoCCD that has enhanced nanosecond-scale control over the light source trigger delay.

The Imagex-TGi system has been widely used for studying long-lifetime probes such as Lanthanide complexes, Oxygen and Temperature sensitive sensors and inorganic phosphors. Extiinction ratio of the Imagex TGi shutter is very high (c. 1:30,000 at 520nm) and is therefore very well-suited to eliminating short lifetime background signal to offer higher sensitivity detection of the longer-lifetime probe.

The figures below show a particularly difficult optical arrangement tackled with an Imagex-TGi detection system. In this experiment we pipetted some samples of long-lietime ruthenium nanospheres and of a shortlifetime rhodamine dye into a standard 96-well microplate.

We then illuminated the sample from below with an array of LEDs. This setup has the advantage in that the excitation light is delivered very efficiently to the sample. However it creates the problem that the light-source is pointing directly at the detector. This is something we would normally try to avoid! 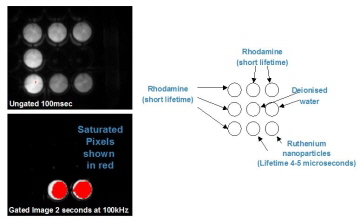 The Imagex-nanoCCD Time-Gated CCD Imaging system has all the features of the Imagex-TGi but also provides two independently programmable 0-255 nanosecond delays on Channels 1 and 2  of its Lightsource Trigger outputs.

The ability to closely control the nanosecond delay on these trigger outputs opens up a range of new functionalities including nanosecond lifetime studies, pump-probe experiments and scattering/time-of-flight imaging.

In addition to the normal Imagex software application the Imagex-nanoCCD is also provided with a software library so that you can write your own Time-Gated Imaging application and integrate the system with other apparatus. 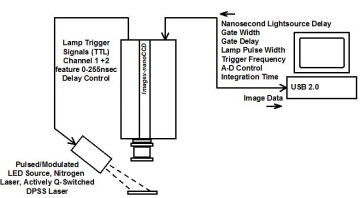 The Imagex nanoCCD has a fast switch-On response time (c.2nsec) Combining this fast response with a fast light source and the inbuilt programmable delay opens up a range of new experimental possibilities and allows the user to perfroms time-gating experiments with shorter lifetime fluorophores.

We have used the nanoCCD together with a nanosecond pulsed DPSS laser to perform lifetime imaging on a model series of quenched quinine sulphate solutions as shown in the accompanying figure. 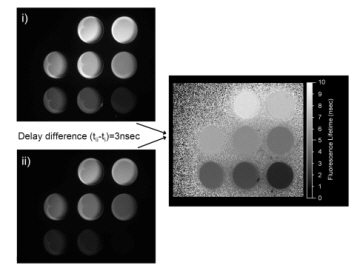 The above image shows a series of Quinine Sulphate solutions quenched with chloride ions. The solutions were pipetted into a black microwell plate and excited using an Elforlight actively Q-switched nanosecond pulsed laser (355nm).

The left-hand images ‘a’ and ‘b’ show the ‘source’ intensity images measured with two different nanosecond delay settings on the laser trigger signal. The right-hand image shows a fluorescence lifetime image calculated from the two source images. 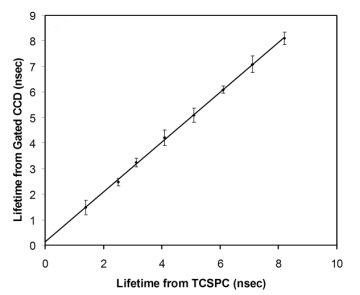 The Imagex software is a Windows application that is designed to be both Simple-to-Use and Flexible. The Imagex Time-Gating Control allows the user to change Lamp Pulse Rate,Lamp Pulse Width, Gate Delay and Gate Width directly from the software interface. These parameters are represented by a graphical key that allows you to monitor the relationship between the gating parameters and the lamp repetition period in real time.

The Imagex software package now includes a free MicroManager Device Adaptor that allows you to integrate Time-Gated Image collection with the popular public domain ImageJ image processing package and to build an experimental system including any other equipment with MicroManager support. (You will need to download the current version of the Micromanager Environment to use this feature)

To find our more about the features of the Imagex Software please download our User manual using the link above.