Vaccines and therapies using in vitro transcribed mRNA have enormous potential for human and veterinary medicine. In general, transfection agents are considered necessary to protect mRNA and enhance transfection, but they add expense and raise concerns regarding quality control and safety. We found that these complex mRNA delivery systems can be avoided by transfecting epithelial cells by aerosolizing the mRNA into micron-sized droplets. In an equine in vivo model, we demonstrated that the translation of mRNA into a functional protein was not dependent on the addition of a polyethyleneimine (PEI) derived transfection agent. We were able to safely and efficiently transfect foal bronchial epithelium using naked mRNA (i.e., mRNA formulated in sodium citrate buffer without a delivery vehicle).

Endoscopic examination of the bronchial tree and histology of mucosal biopsies indicated no macroscopic or microscopic adverse effects of transfection. Our data suggest that mRNA delivered by an atomization device eliminates the need for chemical transfection agents, which can reduce the cost and safety risks of delivering mRNA to the respiratory tract of animals and humans. 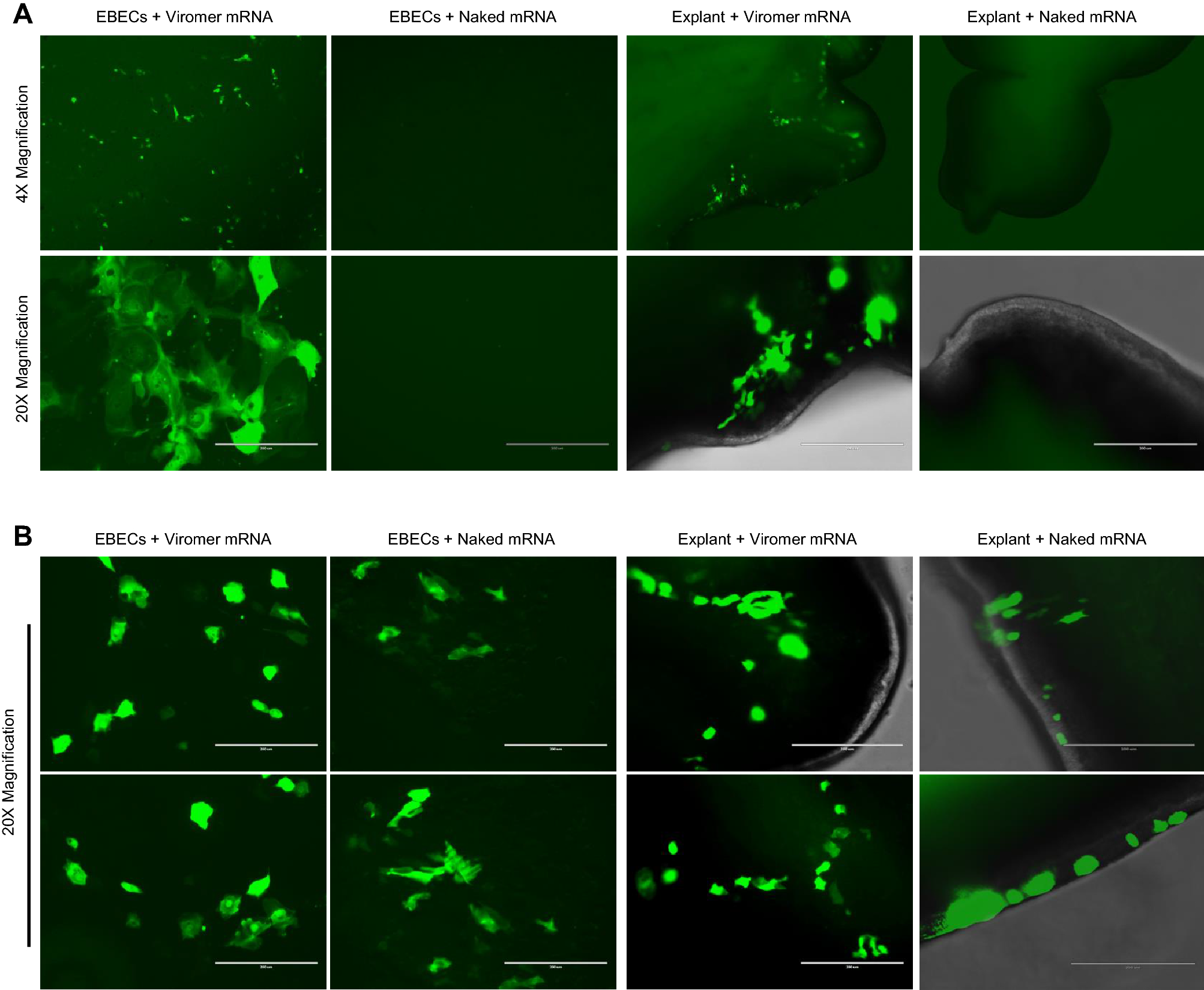 The field of vaccines and mRNA therapeutics is rapidly maturing under pressure from the COVID-19 pandemic, with several candidate vaccines on track to become the first mRNA-based products approved for clinical use1,2. Messenger RNA has gained popularity as a vaccine platform because production is scalable, cell-free and easily standardized, thus avoiding many manufacturing problems related to purification and quality that normally slow the development of traditional protein-based technologies3. If proven effective and safe, the projected large-scale distribution of mRNA-based COVID-19 vaccines will generate a wealth of data on in vitro transcribed (IVT) mRNA products. This knowledge will likely broaden the application of mRNA technologies to many medical problems beyond COVID-19. In addition to vaccines, mRNA has wide applicability, with enormous potential benefit for therapeutic purposes in human and veterinary medicine, including genetic, infectious, metabolic, musculoskeletal, and neoplastic diseases3,4,5,6,7,8. For example, in vivo delivery of mRNA-encoded antibodies is an elegant solution to produce antibody-based therapies with virtually unlimited options4,9,10,11,12.

Since the original reports of the first successful translation of IVT mRNA in mice13,14, much progress has been made to improve the efficiency of translation and overcome stability problems. We now better understand the innate inflammatory responses to IVT mRNA, so that it can be avoided by using optimized codons and modified uracil nucleosides, and increasing the purity of the product3,4,5,15,16. Although naked mRNA (i.e., mRNA administered without a delivery vehicle) has been applied in various in vivo studies, it has become dogma that efficient vehicles (so-called transfection agents) are needed to substantially improve stability. of mRNA and the efficiency of transfection17,18. A variety of vehicles have been developed to protect mRNA and improve the efficiency of mammalian cell transfection, but these vehicles pose problems of additional expense, complex quality control, and in vivo safety3,4,19. Although such packaging may be necessary for most systemic applications due to renal filtration of mRNA20 and degradation by serum RNase enzymes4,21, it is not always necessary or beneficial for certain local applications of mRNA21. For example, IVT mRNA vaccines encoding tumor-associated antigens have been injected intranodally in patients with advanced melanoma or hepatocellular carcinoma3,21. The intratracheal release of naked IVT mRNA has been demonstrated by different research groups in mice10,22, and the vaginal epithelium of sheep has been transfected locally without using a transfection vehicle11.

Our research is focused on applications of mRNA for respiratory diseases. Messenger RNA can be efficiently delivered as an aerosol to the lungs by nebulization23,24. This non-invasive method of drug delivery holds great promise for using mRNA for the prevention or treatment of respiratory diseases. The large surface area of ​​the lungs allows for larger doses and much higher local concentrations of the transcribed protein compared to traditional parenteral applications24. Our