Caption: People who recovered from mild COVID-19 infections produced antibodies circulating in their blood that attack three different parts of the coronavirus spike protein (gray). Credit: University of Texas at Austin
For many people who have had COVID-19, the infections were thankfully mild and relatively brief. But these people's immune systems are still clinging to long-lasting clues about how best to neutralize SARS-CoV-2, the coronavirus that causes COVID-19. Uncovering these clues could point the way for researchers to design highly specific treatments that could help save the lives of people with more serious infections.

An NIH-funded study, published recently in the journal Science, offers the most detailed picture yet of the variety of antibodies to SARS-CoV-2 found in people who have fully recovered from mild cases of COVID- 19. This image suggests that an effective neutralizing immune response targets a broader swath of the virus's now-infamous spike protein than previously recognized. 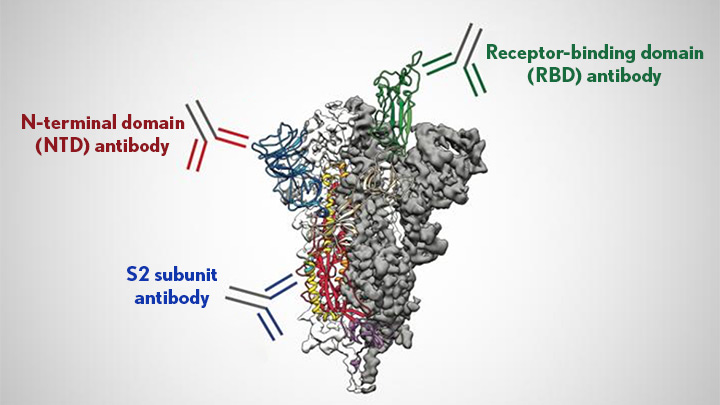 To date, most studies of natural antibodies that block SARS-CoV-2 have focused on those that target a specific portion of the spike protein known as the receptor-binding domain (RBD), and with reason. The RBD is the part of the beak that adheres directly to human cells. As a result, antibodies specifically targeting RBD were an excellent place to start the search for antibodies capable of defending against SARS-CoV-2.

The new study, led by Gregory Ippolito and Jason Lavinder of the University of Texas at Austin, took a different approach. Rather than narrow the search, Ippolito, Lavinder, and their colleagues analyzed the entire repertoire of antibodies to the spike protein from four people shortly after their recovery from mild COVID-19.

What the researchers found was a bit surprising: the vast majority of the antibodies, about 84 percent, targeted other portions of the spike protein in addition to RBD. This suggests that a successful immune response is not concentrated in RBD. It involves the production of antibodies capable of covering areas throughout the peak.

The researchers compare the spike protein to an umbrella, with the RBD at the tip of the "canopy." While some antibodies bind to RBD at the tip, many others apparently target the protein's canopy, known as the N-terminal domain (NTD).

A further study in cell culture showed that NTD-directed antibodies do indeed neutralize the virus. They also prevented a lethal version of the coronavirus adapted to mice from infecting the mice.

One reason these findings are particularly remarkable is that NTD is a part of the viral spike protein that has mutated frequently, especially in several emerging variants of concern, including B.1.1.7 “U.K. variant "and the" South African variant "B.1.351. It suggests that one of the reasons these variants are so effective in evading our immune system and causing new infections, or reinfections, is that they have mutated their way around some of the human antibodies that had been more successful in fighting the original variant of the coronavirus.

It is also noteworthy that around 40 percent of circulating antibodies target another portion of the peak called the S2 subunit. This finding is especially encouraging because this portion of SARS-CoV-2 does not appear as mutable as the NTD segment, suggesting that antibodies targeting S2 could offer a layer of protection against a broader range of variants. Additionally, the S2 subunit may be an ideal target for a potential pan-coronavirus vaccine, as this part of the peak is widely conserved in SARS-CoV-2 and related coronaviruses.

Together, these findings will prove useful in designing booster shots of the COVID-19 vaccine or future tailored vaccines to combat the worrying variants of SARS-COV-2. The findings also lead home to the conclusion that the more we learn about SARS-CoV-2 and the immune system response to neutralize it, the better positioned we will be to thwart this new coronavirus and any others that may emerge in the future.