The human immunodeficiency virus (HIV) has a highly diverse envelope protein that it uses to attack human cells, and the complexity of the viral envelope has hampered vaccine development. Roark et al. report that the immediate and short-term evolutionary potential of the HIV envelope is limited by a number of essential functions, including the escape of antibodies.

Consequently, when introduced into humans as HIV or into rhesus macaque monkeys as human-simian chimeric immunodeficiency virus, homologous envelope glycoproteins appear to exhibit conserved patterns of sequence evolution, in some cases eliciting broadly neutralizing antibodies in both hosts. Conserved patterns of envelope variation and homologous B cell responses in humans and monkeys represent examples of convergent evolution that may serve to guide HIV vaccine development. 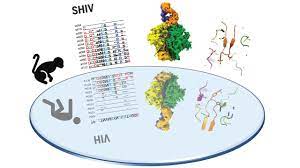 It is widely believed that the development of an effective neutralizing antibody-based HIV-1 vaccine will require the constant activation of multiple germline precursor B cells that express specific immunoglobulin receptors for one or more of the canonical antibody epitope clusters. broadly neutralizing (bNAb), followed by efficient antigen-directed selection for antibody affinity maturation. How to accomplish this feat through immunization has proven to be an overwhelming scientific challenge. An obstacle to the rational design of the HIV-1 vaccine is the lack of a suitable inbred primate model in which bNAbs can be commonly induced, which allows the molecular, biological and immunological mechanisms responsible for such responses to be studied in such a way. reproducible and iterative.
FUNDAMENTAL REASON
Given that the majority of HIV-1 bNAbs identified to date come from humans chronically infected with HIV-1, we hypothesized that one means of eliciting such antibodies in primates could be by infecting rhesus macaques (RM) with the simian human immunodeficiency virus (SHIV). Strains that carry primary HIV-1 envelope proteins (Envs), including those that induce bNAbs in humans. SHIV-infected MRs could be used to assess the potential of particular HIV-1 Envs to elicit bNAbs and to characterize the coevolutionary pathways of the bNAb lineages and related Env intermediaries that elicited them, thus serving as a molecular guide to the rational vaccine design. Recent innovations in SHIV's design make this experimental strategy testable.

Neutralizing antibodies elicited by HIV-1 in naturally infected humans coevolve with viral Envs in distinctive molecular patterns, in some cases acquiring substantial amplitude. We constructed SHIV with transmitted / founder primary Envs from three HIV-1 infected humans who developed bNAbs and used these SHIVs to infect 22 MR. Seven monkeys developed bNAbs that exhibited a wide range of amplitude and power. Unexpectedly, SHIV infections elicited molecular patterns of Env antibody coevolution in monkeys that mirrored that observed in humans infected with homologous Env-bearing HIV-1 strains. Similarities included conserved immunogenetic, structural, and chemical solutions for epitope recognition and precise Env-amino acid substitutions, insertions, and deletions that lead to virus persistence. A rhesus antibody, capable of neutralizing 49% of a global virus panel of 208 strains, contained a 24 amino acid 3 heavy chain complementarity determining region (HCDR3) with a sulfated tyrosine at its tip; This rhesus bNAb exhibited a V2 vertex recognition mode similar to human bNAbs PGT145 and PCT64-35S, with critical interactions involving lysine or arginine residues at positions 121, 166, and 169 of Env and an N-linked glucan at position 160. Another rhesus antibody bound to the CD4 binding site by CD4 mimicry reflecting the human bNAbs 8ANC131, CH235, and VRC01. In other SHIV-infected animals, bNAb responses were directed to a set of canonical V3 high mannose patch epitopes that included Env residues 324GDIR327 and N332. The molecular patterns of epitope evolution that allow virus escape and, at the same time, promote bNAb affinity maturation, were similar in SHIV-infected MRs and in HIV-1-infected humans.

SHIV infection of MR is the only model system, other than naturally infected humans, in which the immunogen (Env) co-evolves with neutralizing antibodies. The high mutability and dynamic replication of HIV-1 and SHIV in vivo results in a constantly evolving quasispecies of virus, meaning that Envs with sufficient binding affinities are continuously generated to drive affinity maturation of the bNAb lineage. SHIV-infected macaques can therefore provide information for vaccine design by allowing the identification of Env intermediaries that can guide the evolution of precursor B cells through affinity maturation stages leading to amplitude and power.