Tests on various cell systems indicated that the two complexes do not interfere with the proliferation of Saccharomyces cerevisiae or healthy BJ skin cells, nor do they cause hemolysis in the active concentration range. However, the compounds showed antibacterial potential, with complex (2) being significantly more active than complex (1) against all bacterial strains tested, both in planktonic and biofilm growth state. Both complexes exhibited very good activity against B16 melanoma cells, with compound (1) showing greater specificity. Taken together, the results indicate that complexes (1) and (2) have specific biological relevance, with potential for the development of antitumor or antimicrobial drugs. 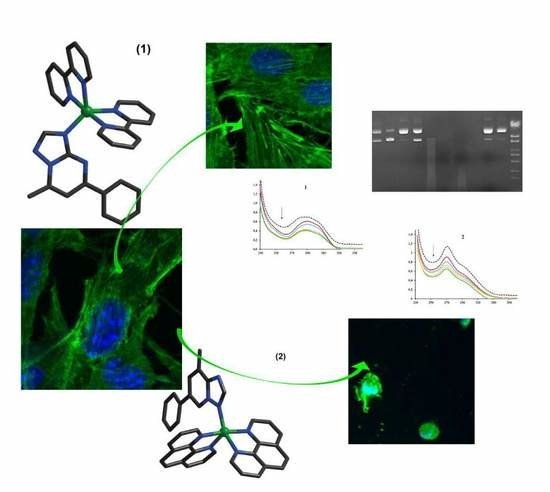 Copper species are unique both from the point of view of coordinative chemistry and from their biological relevance. Some characteristics, such as stereochemistry and the versatility of the oxidation state or the acidic boundary character, strongly recommend the use of copper as the central ion in complexes with a wide variety of ligands, structures and properties.

Copper complexes have been the subject of intensive studies aimed at designing and developing valuable species with antitumor, anti-inflammatory or antimicrobial activities. Most of these complexes contain mixed ligands, eg, N-N-chelating heterocycle such as 2,2'-bipyridine (bpy) and 1,10-phenanthroline (phen), both chosen for their chelating ability and intercalated properties.
Several such complexes have been reported to exhibit potential DNA cleavage and / or antitumor capabilities. For example, complexes with ancillary ligands (an NN chelating heterocycle and a bioactive scaffold containing species [1,2,3,4,5,6,7]), antibiotics [8,9,10,11,12,13, 14], or anti-inflammatory drugs [15,16,17,18] have been shown to have a potent anticancer effect, in some cases even better than the antitumor activity of cisplatin [2,3,4].

Furthermore, complexes with metallonuclease-like activity have been the subject of several studies. In particular, it has been shown that complexes with drugs as auxiliary ligands bind strongly to calf thymus DNA (CT DNA) in an intercalative mode, carrying out their oxidative cleavage through reactive oxygen species (ROS) [10,11 , 12,13,14, 15,16,17,18,19,20].

In a separate line of research, complexes of copper (II) with N-N-chelator heterocycle and sulfonamide antibiotics were found to be active against strains of Mycobacterium tuberculosis [21] and Pseudomonas aeruginosa [22]. Furthermore, the antibiotic complexes of phen and quinolone [23,24] were shown to be active in several strains of Escherichia coli, showing promising potential for the development of effective antimicrobials against antibiotic resistant strains.

However, despite these multiple biological effects, the number of Cu (II) complexes containing a triazolopyrimidine derivative in addition to N-N-chelating heterocyclic ligands is surprisingly limited. So far, only three of these complexes have been synthesized and structurally characterized, with 1,2,4-triazolo [1,5-a] pyrimidine (tp) and 5,7-dimethyl-1,2,4-triazolo [1 , 5 -a] pyrimidine (dmtp) [25]. Among these, the tp species were more active against Trypanosoma cruzi and Leishmania peruviana compared to the reference antiparasitic drugs [26].

The biological and coordinative properties of triazolopyrimidine derivatives make them good candidates for adjusting the reactivity and properties of the [Cu (N-N) 2] 2+ motif relative to biomolecules. In this context, we develop new copper (II) perchlorate complexes containing a chelating heterocycle ligand NN (2,2'-bipyridine or 1,10-phenanthroline) and 5-phenyl-7-methyl-1,2,4- triazolo [1,5-a] pyrimidine (pmtp). To improve the thermodynamic and kinetic stability of the complexes and to modulate lipophilicity and non-covalent interactions with biomolecules, N-N-chelating heterocyclic ligands were selected. For modulation of biological activity through lipophilicity and interactions