Isotopic labeling (or isotopic labeling) is a technique used to track the passage of an isotope (an atom with a detectable variation in neutron count) through a reaction, metabolic pathway, or cell. The reagent is 'tagged' by replacing specific atoms with its isotope. The reagent is then allowed to undergo reaction. The position of the isotopes in the products is measured to determine the sequence that the isotopic atom followed in the reaction or metabolic pathway of the cell. The nuclides used in isotopic labeling can be stable nuclides or radionuclides. In the latter case, the labeling is called radiolabelling.

In isotopic labeling, there are multiple ways to detect the presence of labeling isotopes; through its mass, vibratory mode or radioactive decay. Mass spectrometry detects the difference in the mass of an isotope, while infrared spectroscopy detects the difference in the vibrational modes of the isotope. Nuclear magnetic resonance detects atoms with different gyromagnetic ratios. Radioactive decay can be detected through an ionization chamber or autoradiography of gels. 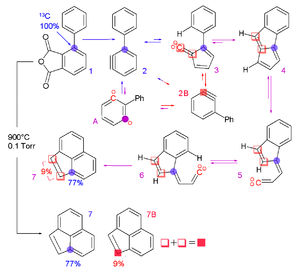 An example of the use of isotopic labeling is the study of phenol (C6H5OH) in water by substituting common hydrogen (protium) for deuterium (deuterium labeling). By adding phenol to deuterated water (water that contains D2O in addition to the usual H2O), the substitution of hydrogen for deuterium is observed in the hydroxyl group of phenol (resulting in C6H5OD), indicating that phenol easily undergoes reactions of hydrogen exchange with water. Only the hydroxyl group is affected, indicating that the other 5 hydrogen atoms do not participate in the exchange reactions.

An isotopic tracer, (also "isotopic marker" or "isotopic tag"), is used in chemistry and biochemistry to help understand chemical reactions and interactions. In this technique, one or more of the atoms in the molecule of interest is replaced by an atom of the same chemical element, but a different isotope (such as a radioactive isotope used in radioactive screening). Because the labeled atom has the same number of protons, it will behave almost exactly the same way as its unlabeled counterpart and, with few exceptions, will not interfere with the reaction under investigation. However, the difference in the number of neutrons means that it can be detected separately from the other atoms of the same element.

Nuclear magnetic resonance (NMR) and mass spectrometry (MS) are used to investigate the mechanisms of chemical reactions. NMR and MS detect isotopic differences, which makes it possible to determine the position of the labeled atoms in the structure of the products. With information about the position of the isotopic atoms in the products, the reaction pathway that the initial metabolites use to become the products can be determined. Radioactive isotopes can be tested using gel electrophoresis gel autoradiography. Radiation emitted by compounds containing radioactive isotopes darkens a piece of photographic film, recording the position of the labeled compounds relative to each other on the gel.

Isotope tracers are commonly used in the form of isotope ratios. By studying the relationship between two isotopes of the same element, we avoid effects involving the general abundance of the element, which generally floods much smaller variations in isotopic abundances. Isotopic tracers are some of the most important tools in geology because they can be used to understand the complex mixing processes in terrestrial systems. Further discussion of the application of isotopic tracers in geology is covered under the heading of isotope geochemistry.