In immunology, antibodies (immunoglobulins (Ig)) are classified into several types called isotypes or classes. The variable regions (V) near the tip of the antibody can differ from molecule to molecule in myriad ways, allowing it to specifically target an antigen (or more accurately, an epitope). In contrast, constant regions (C) only occur in a few variants, which define the class of the antibody. Antibodies of different classes activate different effector mechanisms in response to an antigen (triggering different elements of the innate immune system). They appear at different stages of an immune response, differ in structural characteristics and in their location around the body. 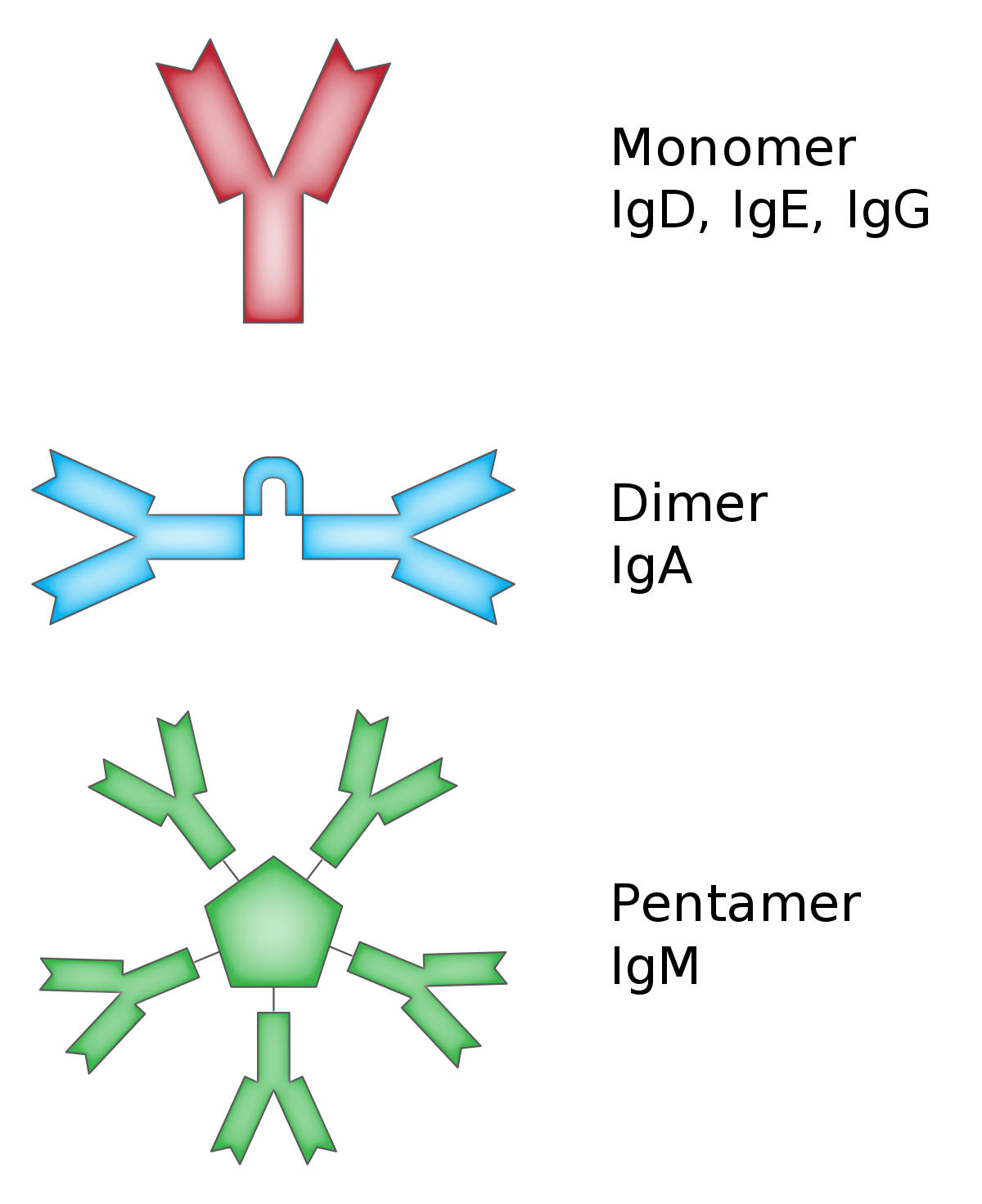 Isotype expression reflects the maturation stage of a B cell. Naive B cells express IgM and IgD isotypes with variable, non-mutated genes, which are produced from the same initial transcript after alternative splicing. The expression of other isotypes of antibodies (in humans: IgG, IgA and IgE) occurs through a class switching process after exposure to the antigen. [2] Class change is mediated by the enzyme AID (activation-induced cytidine deaminase) and occurs after the B cell binds to an antigen through its B cell receptor. Class change generally requires interaction with a T helper cell.

There are also two light chain isotypes κ and λ; however, there is no significant difference in function between the two. Therefore, an antibody isotype is determined solely by the constant regions of the heavy chains. [1]

IgM is first expressed as a monomer on the surface of immature B cells. Following antigenic stimulation, IgM + B cells secrete a pentameric IgM antibody made up of five Ig monomers that are joined by disulfide bonds. The pentamer also contains a polypeptide J chain, which links two of the monomers and facilitates secretion on mucosal surfaces. The pentameric structure of IgM antibodies makes them effective in binding antigens with repetitive epitopes (eg, bacterial capsule, viral capsid) and activating the complement cascade. Because IgM antibodies are expressed early in the B-cell response, they are rarely highly mutated and have broad antigenic reactivity, providing an early response to a wide range of antigens without the need for T-cell help. [5]

IgD isotypes are expressed in naïve B cells as they leave the bone marrow and populate secondary lymphoid organs. Levels of surface expression of the IgD isotype have been associated with differences in the activation state of B cells, but its role in serum is not well understood. [6]

IgG, IgE, and IgA antibody isotypes are generated after class change during germinal center reaction and provide different effector functions in response to specific antigens. IgG is the most abundant class of antibodies in serum and is divided into 4 subclasses based on differences in the structure of the constant region genes and the ability to trigger different effector functions. Despite the high sequence similarity (90% identical at the amino acid level), each subclass has a different half-life, a unique antigen-binding profile, and a different capacity for complement activation. IgG1 antibodies are the most abundant class of IgG and dominate responses to protein antigens. Poor IgG1 production is seen in some cases of immunodeficiency and is associated with recurrent infections. [7] IgG responses to bacterial capsular polysaccharide antigens are mediated primarily through the IgG2 subclass, and deficiencies in this subclass result in susceptibility to certain bacterial species. [8] IgG2 represents the major antibody subclass that reacts to glucan antigens, but subclasses of IgG1 and IgG3 have also been observed in such responses, particularly in the case of protein-glucan conjugates.

IgG3 is an effective activator of pro-inflammatory responses by triggering the classical complement pathway. It has the shortest half-life compared to the other IgG subclasses [11] and is frequently present together with IgG1 in response to protein antigens after viral infections. IgG4 is the least abundant IgG subclass in serum and is often generated after repeated exposure to the same antigen or during persistent infections.

IgA antibodies are secreted in the respiratory or intestinal tract and act as the main mediators of mucosal immunity.  They are monomeric in serum, but appear as a dimer called secretory IgA (sIgA) on mucosal surfaces. Secretory IgA is associated with a J chain and another polypeptide chain called the secretory component. IgA antibodies are divided into two subclasses that differ in the size of their hinge region. [15] IgA1 has a longer hinge region that increases its sensitivity to bacterial proteases.

Therefore, this subclass dominates serum IgA, while IgA2 is predominantly found in mucosal secretions. Complement fixation by IgA is not a major effector mechanism on the mucosal surface, but the IgA receptor is expressed on neutrophils that can be activated to mediate antibody-dependent cellular cytotoxicity. sIgA has also been shown to enhance the immune response in intestinal tissue by uptake of antigen along with antibody bound by dendritic cells.

IgE antibodies are present in the lowest concentrations in peripheral blood, but they constitute the main class of antibodies in allergic responses through the involvement of mast cells, eosinophils, and Langerhans cells. [19] Responses to specific helminths are also characterized by elevated levels of IgE antibodies.