Tag: isotypes of antibodies and their function

IgG is the most abundant antibody in normal human serum, accounting for 70-85% of the total immunoglobulin pool (1). It is monomeric with a molecular weight of approximately 150 kDa, is the major antibody of the secondary immune response and has the longest half-life (20-24 days) of the five immunoglobulin classes. IgG consists of four human subclasses (IgG1, IgG2, IgG3 and IgG4) each containing a different heavy chain. They are highly homologous and differ mainly in the hinge region and the extent to which they activate the host immune system. IgG1 and IgG4 contain two inter-chain disulphide bonds in the hinge region, IgG2 has 4 and IgG3 has 11. Details of the functional differences between the IgG sub-classes in human will be described in the section on Fc effector function. In mice the IgG class is divided into five sub-classes (IgG1, IgG2A, IgG2B, IgG2C and IgG3) and in rat there are four (IgG1, IgG2A, IgG2B, IgG2C). Sub-class nomenclature has arisen independently for each species and so there is no general relationship between the sub-classes from each species. 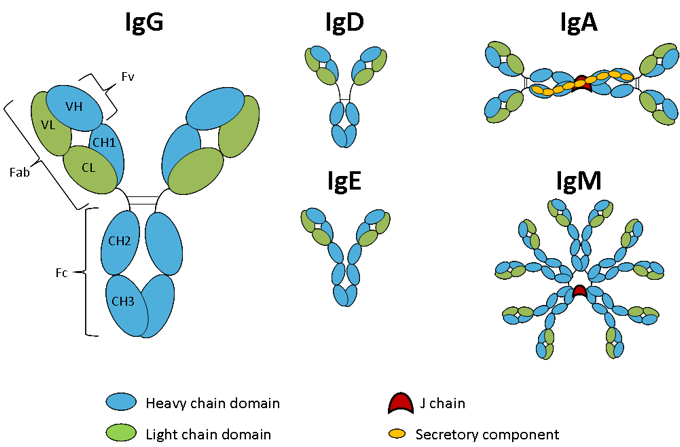 IgM accounts for 5-10% of the immunoglobulin pool and is the predominant antibody in the primary immune response (1). Unlike IgG, IgM does not contain a hinge region but does contain an additional constant domain and an 18 amino acid tailpiece at the carboxy terminus, which contains a cysteine and is involved in multimerisation of the molecule. It is classically represented as a pentamer of the basic four chain structure held together by a J chain but can also exist in a hexameric form without the J chain (2) and as a monomer on the surface of B-cells. Soluble IgM is in excess of 1 MDa and thus due to its size is largely confined to the intravascular pool.

IgA represents approximately 5-15% of the antibody pool and either exists as a monomer or a dimer (1). IgA is the predominant antibody in mucous secretions such as saliva, tears, milk and intestinal juice. Like IgM, the multimeric form of IgA contains a tail piece at the carboxy terminus and is held together by the J chain. The secretory component is a 75 kDa polypeptide chain synthesised by epithelial cells of the gut for linkage to the dimeric form of IgA. As the name implies the secretory component facilitates IgA transport across epithelial cells but is also involved in protecting IgA secreted into the lumen of the gut from proteolytic digestion.

IgD accounts for less than 1% of the total plasma immunoglobulin but is present in large quantities on the membrane of B-cells (1). IgD has the same basic structure as IgG but with an extended hinge region which is very susceptible to proteolytic digestion. The precise function of this class of antibody is still unknown.

IgE is very scarce in the serum but is found on the basophils and mast-cells of all individuals (1). In a similar manner to IgM, IgE has two additional constant domains in place of the hinge region. This class may play a role in immunity to parasites but is more commonly associated with type I immediate hypersensitivity, where an IgE immune response occurs to innocuous environmental antigens such as pollen and peanuts.