DNA, or deoxyribonucleic acid, is the biological molecule that contains the information necessary to create a living organism. As the cell divides to become two, the DNA must be copied for both cells to contain the necessary genetic information. The synthesis or manufacture of new DNA strands in living cells is called "DNA replication."

Making a new strand of DNA

DNA polymerases are a group of enzymes that make new DNA. But for this enzyme to work, it needs a primer, a short nucleotide sequence that is attached to one of the DNA strands. During DNA replication, the primer is usually a short sequence of ribonucleic acid (RNA), which is then degraded and replaced by DNA. 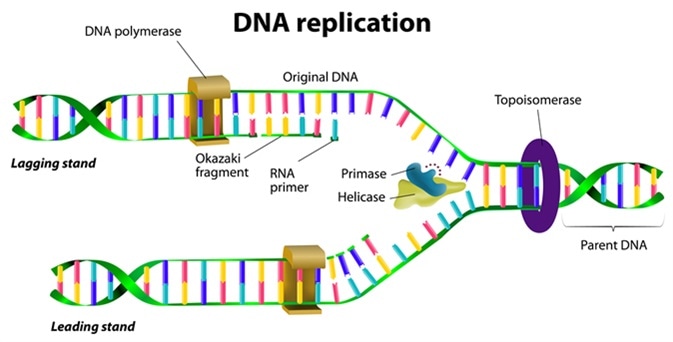 Directionality of DNA and how it affects DNA synthesis
DNA has directionality, with one strand going from 5 'to 3' and the other going from 3 'to 5'. In the 5'-3 'strand, the 3' end is exposed during the synthesis of new DNA. This means that DNA polymerase can produce new DNA in the direction of the template DNA.

Proofreading
Sometimes mistakes are made when adding nucleotides to the template DNA strand. Some DNA polymerases have what is called "3'-5 'exonuclease activity". The 3'-5 'exonuclease activity, which acts against the polymerase or synthesis activity, cuts nucleotides that do not match the template. This provides a proofreading so that the new DNA strand is as accurate as possible.