RNA-dependent RNA replication is a special process reserved exclusively for RNA viruses, but not cellular RNAs. Almost all RNA viruses (except retroviruses) undergo RNA-dependent RNA replication by a virus-encoded RNA-dependent RNA polymerase (RdRP), which specifically replicates the viral RNA genome. Viral satellite RNAs do not encode their own polymerase, but rely on the RdRP of the coexisting helper virus for their replication. The hepatitis delta virus (HDV) and plant viroids present an exception that still confuses conventional thinking. None of them encode an RdRP and yet they can undergo robust RNA replication autonomously once inside cells. It is intuitive that they have to replicate their RNA genome using a cellular enzyme. However, unlike plant and lower animal species, which encode RdRPs that are putatively involved in gene silencing (11, 13, 57, 58), no mammalian cell has been shown to encode RdRP or its equivalent. However, RNA interference phenomena suggest the possibility that RNA template amplification of RNA may also take place in mammalian cells (61). Thus, viroids and HDV present both a challenge and an opportunity to understand a potentially physiological flow of genetic information from RNA to RNA in mammalian cells.

Viroids and HDV differ in that viroids do not encode any protein, while HDV encodes a protein (hepatitis delta antigen [HDAg]) that is intimately involved in RNA replication. Furthermore, HDV RNA not only has to replicate itself, it also needs to transcribe a kind of subgenomic mRNA that encodes HDAg. The transcription of the mRNA encoding HDAg has all the characteristics of conventional mRNA transcription in cells, except for the nature of the template (DNA versus RNA). Thus, HDV represents a hybrid of conventional DNA-dependent transcription and unique RNA-dependent RNA synthesis in the absence of an RdRP. 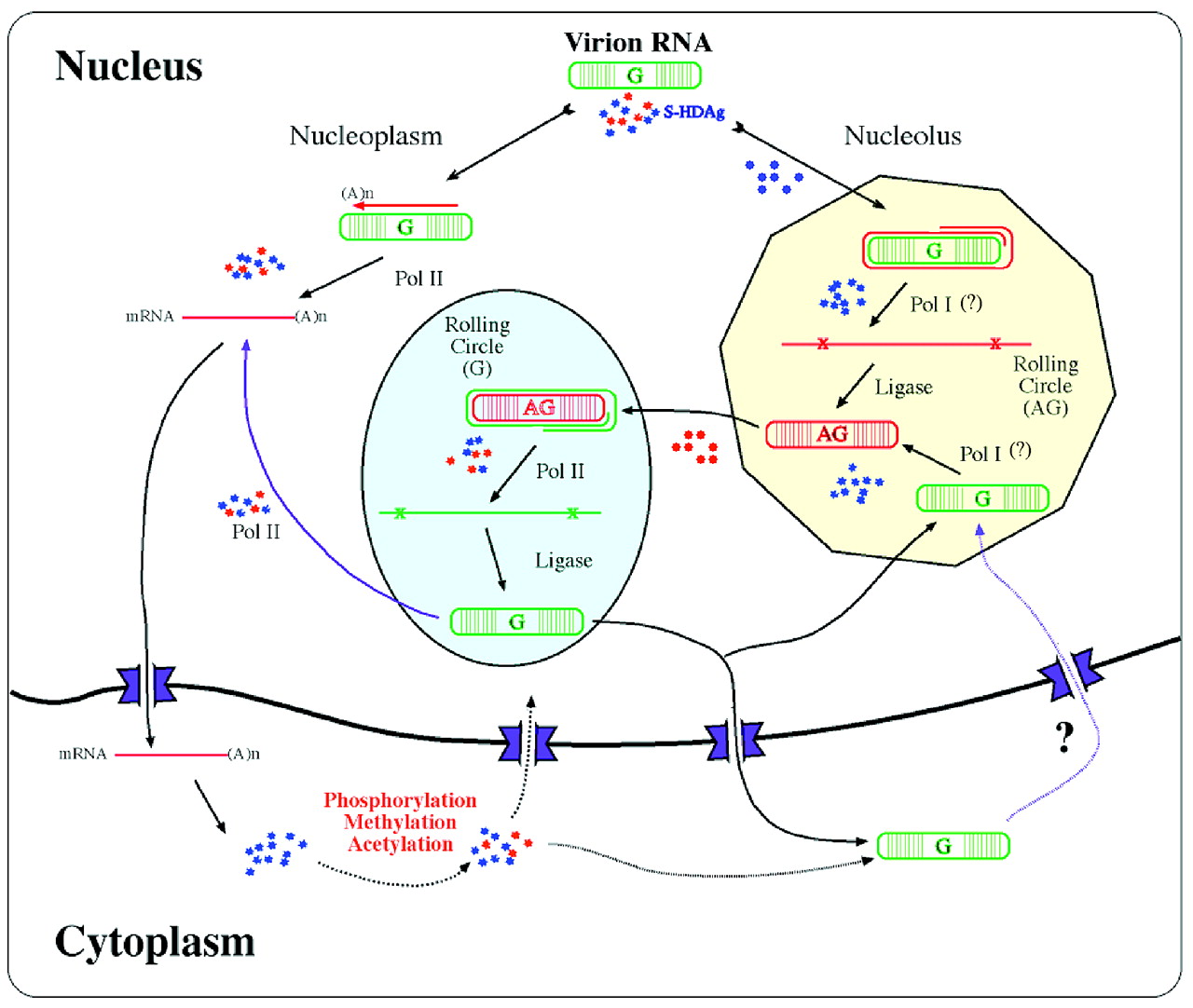 HDV causes chronic and occasionally fulminant hepatitis (20). It is always associated with hepatitis B virus (HBV) infection because HDV cannot form virus particles on its own (54). It was prevalent throughout the world, with a particularly high prevalence rate in Mediterranean countries. In recent years, the incidence of a new HDV infection has plummeted, in part due to HBV vaccination. However, the scientific mystery surrounding HDV replication is complicated.

STRUCTURE OF HDV AND HDAg RNA
HDV contains a 1.7 kilobase circular RNA genome that can replicate on its own, but requires HBV as a helper virus to supply the HBV surface antigen for the production of virus particles. The genome sequence is nearly self-complementary, such that viral RNA forms a rod-shaped, double-stranded RNA structure under native conditions (29, 70). As such, HDV RNA is very similar to viroid RNAs; in fact, part of the RNA sequence of HDV is evolutionarily related to viroids (15). However, HDV RNA is 3 to 4 times longer than the typical viroid, and the additional sequences are attributed to a HDAg coding sequence on the complementary strand (antigenomic sense). HDV RNA contains ribozyme activities on the genomic and antigenomic strands, which cleave the respective RNA strand at cis (73). This is another feature shared between HDV RNA and viroids. Although HDV RNA assumes a rod-like structure under native conditions, it undergoes dynamic conformational changes under different conditions. For example, the RNA sequence around the ribozyme domain forms several helices to assume the active ribozyme conformation (16). Presumably, the structure of HDV RNA also changes to other conformations during RNA replication and editing (see below). Regulatory mechanisms to control RNA conformation are likely crucial to the biology of HDV replication.
The production of HDAg is a unique feature that distinguishes HDV from viroids. HDAg consists of two distinct species, the small form (S-HDAg; 195 amino acids, 24 kDa) and the large form (L-HDAg; 214 amino acids, 27 kDa) (31). The